Dr Ian graduated from Life University in Georgia in 2001 and relocated to his wife's home state of Massachusetts. Originally from Durban, South Africa it was a huge adjustment. He a sports junky and loves to play golf. He was was on scholarship for rugby at Life University and was voted Most valuable "back" award 2000 and 2001. Life University won the National Super League in 2000 which at the time was the highest level of men's rugby in the country. He then played for Worcester Rugby Club in 2003, '04 and '05. They also excelled and went to the final 4 twice in the National League with two 3rd place finishes. he was the team chiropractor and team member at the time. He hung his boots up in 2005 and traded them for golf clubs. He has strived to grow his skills in sports chiropractic using his skills in extremity adjustments to allow athletes to reach their full potential. He has also taken many courses in pediatric and pregnant mom care to practice alongside his wife, Dr. Arlene.

He loves taking care of his patients and is dedicated to finding the route cause of your pain and helping you with chiropractic to regain function. He loves to teach you other ways to prevent spinal joint aggravation through repetitive postural stress we place on ourselves everyday. 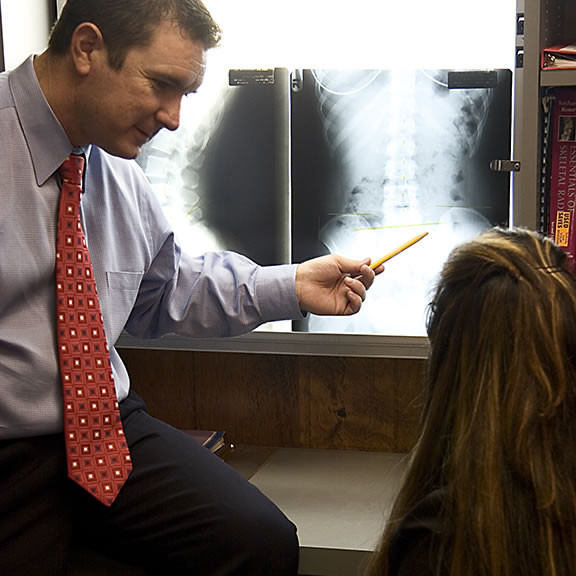 Dr. Ian is seen here educationg a patient through x-ray analysis. He is a constant teacher and in that is a constant student always trying to find the best ways to help his patients.